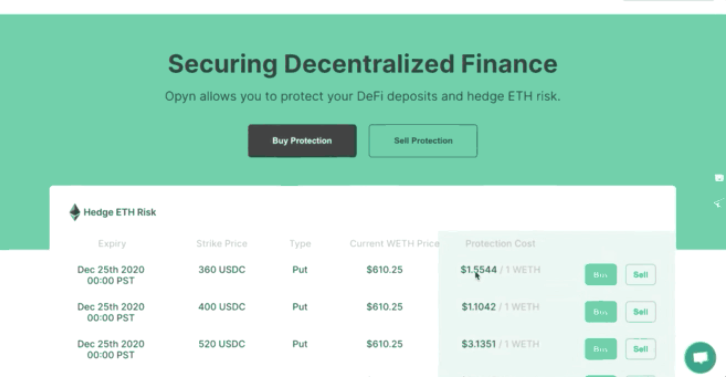 Unless you’ve been missin-in-action since 2011, you know that crypto can be one of the most volatile assets out there ($22k Bitcoin, anyone)? Options trading has been an answer to de-risking for stocks, but has been largely unavailable on crypto… until now! Let's open up this week’s drop with Opyn.

For the longest time, trading cryptocurrencies has been seen as risky, inaccessible, and complicated. Trading platforms for cryptocurrency trading like Coinbase and Robinhood have only recently become mainstream but even so, they lack one vital component — being able to hedge cryptocurrency risks. Anyone can fall prey to volatile stocks, with one trader even losing 99% of their holdings.

Opyn is the first company to bring a bedrock financial instrument, 'options trading', to Ethereum, a popular cryptocurrency. Opyn is making buying puts & calls available to anyone in crypto as long as the cryptocurrency is on Ethereum and follows the ERC20 token standard. All option trades are public - on the blockchain - or in other words, they can be traced back to their address.

🤝 Get involved with Opyn